Whether they are welcome or not, signs of spring and summer are abuzz with the flutter, stings, and sometimes plant damage, of insects.  But where do they go in winter?  Snow, ice, and dormant trees all seem uninviting for insect survival.  Still, insects seem to take a cue from British author H.G. Wells who once observed, “Adapt or perish, now as ever, is nature’s inexorable imperative.”

Northern Michigan environs seem an incredibly hostile environment for our winged, six-legged friends, but they employ a wide array of survival strategies to adapt to their surroundings.   For instance, some migrate to avoid freezing temperatures.  Others seek shelter, and some even remain in their larval states in various places.  Physiological changes further allow some either to enter a state like hibernation or even become freeze tolerant.  As expected, some lay eggs and die, allowing their future young to overwinter and greet spring. These diverse characteristics exist in both beneficial and nuisance insects, so it’s important to use cultural practices that offer a balance to encourage health for the beneficials and to

provide some level of control of harmful pests.

Probably the most familiar and best example of migrating insects is the Monarch butterfly.  In late August, they begin their long trip south to overwinter in Mexico.  While some dragonflies remain under ice layers active in their larval states, the Green Darner moves south to areas like Texas and Mexico to avoid freezing temperatures.  The Asian lady beetle is an example of an insect that finds a “microhabitat” and seeks shelter under roof shingles and in cracks and crevices of windows or siding.  Leaf litter, rocks and decaying logs all provide another type of refuge for beetles, pillbugs, stink bugs and grasshoppers. Other insects like mites harbor in plant bud scales while some like the Japanese beetle prefer to harbor in soil.  Galls (swelling of plant tissue) can provide shelter for midge larvae.  The European honeybee remains in its hive in all life stages during winter, clustering with the colony and using wing vibrations and oxidizing honey to keep warm.

Some insects avoid freezing by lowering the point at which their body fluids freeze.  This type of supercooling allows them to withstand temperatures below the freezing point.  To achieve this, some empty their gut to prevent internal ice formation, while others produce glycerol, an “antifreeze,” to lower the freezing temperature of their hemolymph or body fluid.  Codling moths, the larvae of the emerald ash borer, and tent caterpillar eggs survive by this sort of freeze avoidance. 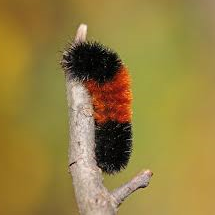 Other insects, including the Woolly Bear caterpillar, are freeze tolerant and can endure internal ice formation.  During the fall, these insect’s hemolymph promotes agents that allow non-lethal ice formation within the creature’s cells.  Still, other insects enter diapause, a state of dormancy like hibernation.  During diapause, the fall’s shorter daylight hours and falling temperatures trigger hormone production which lowers both metabolism and energy requirements to as much as 90 percent below normal.  During this slower and suspended state, the insect does not develop.  As springtime approaches, insects resume activity.  Eggs, larvae, pupae, and adults can enter diapause depending upon the species.

Finally, some insects lay eggs and die before winter arrives.  Most crickets die in winter, and the eggs they lay in soil hatch in spring ushering in a new generation for spring.  A small number of crickets do overwinter as nymphs and some species of crickets diapause.

A Balance of Strategies Can Promote and Discourage Development

Humans can help control nuisance pests and encourage beneficials by certain practices.  Postponing fall cleanup until spring when temperatures are

above 50 degrees for at least a week can provide places for insects to survive winter’s harshness.  At the same time, delaying can also encourage nuisance pests.  Cleaning up leaves and chopping down plants might result in tossing out a butterfly chrysalis or removing shelter for solitary bees.  Thus, balance is the key to promoting a natural system that allows success for beneficials.  Leave healthy, hollow stemmed plants as refuge spots, and wait until spring to trim ornamental grasses as they provide sheltering for bumblebees.  Small piles of leaves and grass clippings and brush provide spots for ground beetles, and compost promotes beneficial microbes and predatory mites.  At the same time, it’s crucial to inspect garden plants and remove plant material where known pests existed.  Check garden plants like broccoli and kale for aphids and toss infested material.  Raking and turning over the soil can expose grubs and beetles to disturb their winter habitat and provide food for birds.

When spring and summer finally arrive, this versatile adaptability guarantees an insect will be visiting your garden — whether welcome or not!

“So Cute,” my young grandchildren and I would say while watching those furry little chipmunks scurrying in and out of my garage. Except during the winter of 2019/2020, there 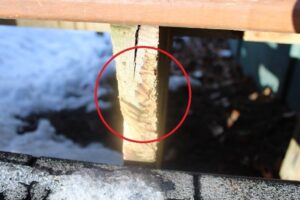 seemed to be an abundance of those cute little creatures, as well as their squirrel and mouse relatives. One day, I noticed a lot of chewing destruction in my front porch and front wood door frame.  Also, a large hole in my cedar garage siding which I patched with half inch plywood. 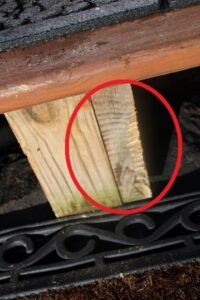 It was eaten through a second time within an hour while I was on a hike with a neighbor.  The damage had to be stopped!  I went on the DNR website and found information on a local nuisance pest control business and elicited their services.  In the meantime, I spoke to our MGANM, MSU extension person, Nate Walton, who spoke of a “MAST” year.  I googled that word and learned when our trees overproduce their nuts i.e., acorns, hickory nuts, etc. the rodent population explodes.  After 5 weeks of trap setting and disposal of more than 50 rodents, the weekly visits from my pest control guy to empty the traps subsided. However, during his last visit/inspection he found several holes where rodents had chewed through the drywall and insulation in the garage where it connected to the house.  He patched them as well with black expandable pepper foam.  Then I noticed a lot of the flower buds on my magnolia, lilacs and weeping cherry trees were also being devoured by those nasty little rodents.  I bought some more traps and set them with cheese, peanut butter, or pumpkin seeds (the seeds worked the best). I even resorted to throwing stones at them to scare them away from my flowering trees. I called the pest control guy back one more time as I was still getting an occasional mouse in the house.  He found 2 more potential entrances.

Some people have said I should get an outdoor cat; however, I am allergic and did check with the Humane Society who said that was not condoned.  Anyway, the cat would have to come indoors in the cold winter months.  What I have noticed since I have declared war on any rodents trying to destroy my home or gardens, is that as soon as I open my bedroom shade in the morning, they take off into the woods. When they see me come to a window or glass door, they too will take off running.  I have not caught a single rodent in any trap inside the garage or house in over 4 months.  I will stay vigilant, as I hope this article gets the word out to those who also struggle from rodent issues…WE SHALL Overcome? Ha, Ha.

Ed note – there were a number of comments during the contributor’s article review so I’ve included those comments below.

Lillian Mahaney-Leland, AMG, licensed wildlife rehabilitator: “As a licensed wildlife rehabilitator, rodent problems are something I (and my fellow rehabbers across the country) hear quite frequently.  It is terrible when they destroy things, and we want to keep that from happening.  If the exterminator is bait stations that contain rodenticide that is a huge problem.  We lose a huge amount of hawks, owls, opossums, raccoons, skunks, foxes, coyotes and even cats and dogs from eating a poisoned rodent.  We are actually hoping to have those rodenticides banned.

The best solution is to be sure there is not an entryway and then to make the area “unlivable”.  Getting a box of the strongest smelling fabric softener sheets and putting them in the area wreaks havoc with the sensitive noses of rodents.  People have used them in garages, sheds, boats, cars, and cottages with good success. Perfumed sprays (like body spray) also work well since the key is making things fragrant.

When lethal methods are the only solution using the old-fashioned traps (like Victor wood ones) is the most humane method.  Some exterminators use traps that hold a number of rodents and then the traps are only checked once a week or so.  The rodents are panicked and starving during this time.  Many exterminators use traps that have glue at the bottom.  Those types of traps are simply sadistic and barbaric.

Once you think the mice are gone, I would try making the area very fragrant either with fabric softener sheets (the less expensive are usually the most fragrant) or even the body spray mentioned above.  I use a combination of both methods in the garage with great success.”

Brenda’s response: “Thanks Lil, I have used dryer sheets in the house and garage and under my front porch…wish there were a more effective solution!”

Beth Milligan, MG Trainee: “Speaking from experience, raisins work amazingly well in mice traps. We have killed seven mice so far this winter off of the same single raisin! We have found it to be an effective solution that doesn’t hurt or poison other animals.”

9am to Noon, M-F Year round
Also 1pm-4pm in Spring/Summer